We’re all in this together. But not all of us are acquainted yet. In the interest of making casual introductions among those of us working under the same roof, we at Temescal Works will be posting periodic snapshot profiles of our members. Read below for our first get-to-know-your-neighbor Q&A. 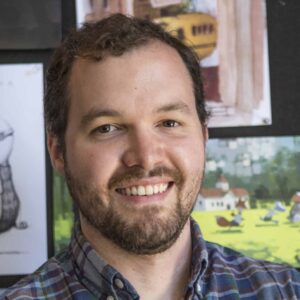 Where he sits: Mezzanine level, toward the back

What he does for a living: Film editor, specializing in animated shorts and feature films as well as animated virtual reality.

Born and raised in Louisiana, Furnish attended college at LSU and moved to the Bay Area in 2004, getting his start as a film editor, location scout and production assistant,—a freelance film and television jack-of-all-trades. In 2007, he landed a job at Pixar, the famed Emeryville animation studio, beginning his tenure, he says, “at the bottom rung and gradually working my way up.” He wound up earning credits on a range of well-known films, including Toy Story 3 and Brave. In 2017, Furnish lit out on his own as an independent film editor, but not before collaborating with this Pixar colleagues on “The Dam Keeper,” an animated short that was nominated for an Academy Award. We caught up with Furnish to ask about his work experiences, past and present, and to find out what projects have him most excited now.

Temescal Works: Were you one of those kids who started making films as soon as you were big enough to hold a camera?

Furnish: I pretty much got my start in college. At the time, LSU didn’t have a film program, so I majored in graphic design. I started making short films with some friends at school. They weren’t great films, but we were learning on the fly.

TW: What were some of your first projects?

Furnish: A trio of friends and I did a video for a New Orleans rapper. It was about him coming up in a tough neighborhood in New Orleans and having parents who were always fighting and eventually divorcing. It was an intense shoot. We were just walking around with him trying to get shots and he was telling us stories. “Oh, and here’s where I saw my first dead body when I was 8.”

TW: Did he become a well-known rapper?

TW: Any other notable early works?

Furnish: The first short feature was also in college. A dark thriller called Beautiful. It was about a serial killer stalking someone on campus, shot at night at LSU. It was one of those first-attempt college films, and we made tons of mistakes. More importantly, it was the first project where we took on many different roles, and I discovered a love of editing.

TW: What kind of problems do you notice when you watch some of your more youthful work?

Furnish: A lot of new editors are drawn to noticeable, highly stylized editing when they first start out. It’s much harder to cut a narrative scene that flows so naturally that you don’t even notice the editing. When I look at my past work, I see a lot of mistimed edits, depending too much on music to the save the cut, and lumpy pacing. It’s hard not to watch it and want to recut all of it.

TW: After college, San Francisco. Was it hard to get a start out here?

Furnish: I did pretty much anything and everything I was offered. Location scout. Production assistant. I worked on some bad reality TV shows.

Furnish: One of them was a dating show. The conceit was that were four women who were perma-single and in their late 20s and ready to get into relationships, and they’d bring love coaches to help them through these dates. It had two working titles—Single Minded and How to Get the Guy. I don’t remember what it got released under.

TW: For someone interested in animation, Pixar seems like it would be a dream job. Was it?

Furnish: It was a great experience. I came in pretty much at the bottom rung and worked my way up. A lot of what I did early on involved going to the recording sessions and making sure we were getting the audio we needed. I remember sitting in on some sessions with Tom Hanks. I was thinking, this is a big deal because, you know, he is. But then he gets in the session and he’s reading the script cold and he delivers a line three ways and says, â€˜No. That’s not good.’ And he’d do it again. Here’s a guy who is a megastar and could have just been complacent and said, â€˜What I did was fine.’ But he continued to push himself. It was an eye-opening experience. Not so much about editing, but about how things get made.

TW: Of all your time at Pixar, was there any one project that left the deepest impression on you? 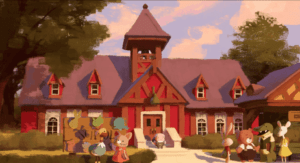 A schoolhouse scene from “The Dam Keeper,” an animated short that Furnish worked on with Pixar colleagues. It was nominated for an Academy Award

Furnish: The one that I’m most proud of is an animated short called The Dam Keeper. It came out of a program called “the co-op.” Pixar provides the resources and employees get to create projects on the side. It was gratifying because it was a smaller, more encapsulated project with a lot of people doing roles for the first time. It was very collaborative, so whenever there was a problem, it was all hands on deck. And at the end, there was a lot of sense of ownership. When it was done, we produced it not thinking anything was going to happen. But we had a great indie festival run, and it eventually secured an Oscar nomination.

TW: So you got to go to the ceremony in Hollywood?

Furnish: Yes. We were in the animated short film ghetto. No lights. They don’t put the cameras on you. But it was still thrilling and surreal. As much as the Oscar nomination was a bright point, the impact of the film was bigger. It’s a film that deals with school bullying through anthropomorphized characters. We showed it at tons of festivals and to see the reactions from audiences was amazing.

TW: As a filmmaker, when you’ve got a coveted gig at a place like Pixar—-well, was it hard to leave?

Furnish: It’s definitely the apex of animated filmmaking. But after being there for around 11 years, and doing some of these smaller projects, I wanted to keeping working on some of those—smaller projects, independent filmmakers. At the same time, there were two or three studios cropping up around the Bay Area, and I thought, you know, it’s possible to work on smaller projects and make a go of it.

Furnish: With animation in particular, people don’t often realize that the process works a little in reverse, meaning: we’re editing the film way before it’s actually been animated. We’re editing off storyboards. We still have dialog and music and other things that make a film, but not the animation. The artists create the storyboards, and then we go in and string them together and time things out and make sure it’s all playing like a film.

TW: Any projects you’re especially excited about at the moment?

Furnish: There’s a VR piece called Crow: the Legend. It’s based on the Native American legend of the crow and how the crow got its raspy voice and its black feathers. The studio I’m working with is doing traditional animation, but in virtual reality. You put on goggles to watch it. It’s like being  immersed inside of a Pixar film.